The remaining Merle Girl has gone:  Peekaboo died on June 11 of this year, and the character of my dog family has changed.  Not because Peeks was a personality or a force in the household, but because she wasn’t.

Let me explain.  I’ve written about the Merle Girls before, and about the third canine ‘charity case’ in my home, Charlie Bear.  I took all three in when they were seniors – about 12 years old for Charlie, and 12 years old as represented by their breeder for the Merle Girls, who were apparently littermates. 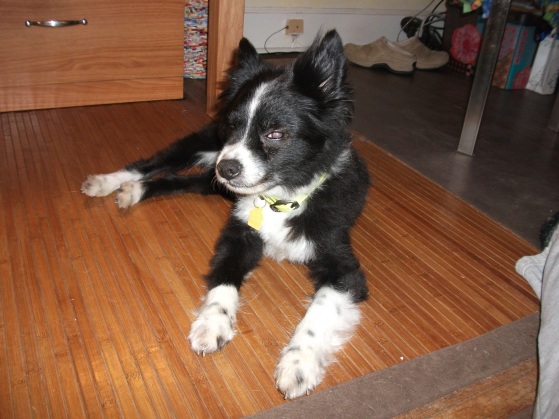 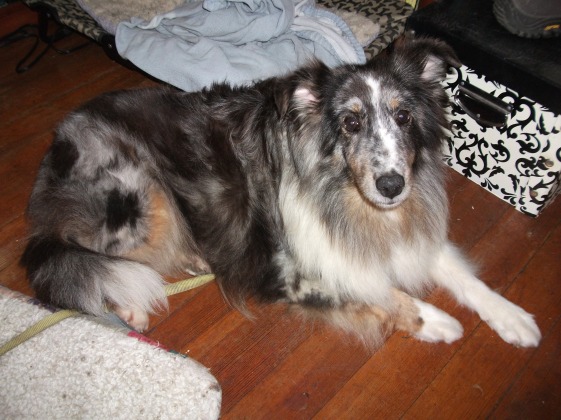 I’d taken in quite a few senior dogs before that:  I started in 2000, when a neighbor left Angus, a 10-year old Sheltie, in my care and never returned (I knew it was a dump when it happened and was happy to have Angus, who was a sweet little guy).  Later I took in other Shelties:  Rudy, an entirely delightful character who fit in with my crew wonderfully; and Good Guy, who just needed a place to nap away his last years; and Banjo, who made me laugh with his enormous enthusiasm for life in my pack; and Irwin, who went for walks with us and squeaked his toy vigorously in the back yard until his heart gave out.  I adopted a 9 year old Finnish Lapphund, Heikki (Mike), who introduced me to the breed, which I love, and to chronic tick disease, which I loathe.  All those dogs were cherished family members and all of them had good times with me and with my own dogs then in residence, from Sander to Sunny, Pippi, and Shiri, and Rowley and Beau.

Charlie and the Girls were a whole different category of adoptees, and if I realized it at the time, I certainly didn’t know how that difference would manifest in my house and my dog family.

For one thing, the three of them were probably unadoptable as pets.  Charlie was a Pomeranian cross – the rescue thought Pom x Sheltie, and although I never saw any Sheltie in that guy, I’m pretty bad at guessing breeds.  Charlie was found on the streets in New York – Brooklyn, I think – and he was blind from untreated KCS (keratoconjunctivitis sicca), and he was a train wreck, structurally, and most of all, he was a crabby SOB of a dog, even when he was enjoying himself.  He wasn’t about to join any group, and he had no use for any of my dogs; once he communicated that, they returned the sentiment wholeheartedly.  For a while I blamed myself for not making a more hospitable environment for Charlie, but that was nonsense.  Charlie would have been Grumpy McGrumpypants anywhere he landed.  He didn’t want to bond with me, either; he didn’t want to be petted, he didn’t want company, he wanted you to put the food bowl down and then get lost.  Because he was a determined, resilient little dog, this was sort of amusing, but I never developed any kind of bond with Charlie, and I provided him with room and board and kept him safe without enjoying his company, or he mine.

The Merle Girls were bred by a hoarder and they were not well bred.  (Shocker, eh?)  Posey was a sweetie, and the more ‘normal’ of the two, in that she could interact with people and enjoyed their company.  She had been bred who knows how many times, and was still intact when she came to me; the rescue vet wasn’t keen to do spay surgery on a bitch who had encapsulated mammary tumors that likely were malignant.  So she remained unspayed, which became a feature of her relationship with one of my dogs, and occasionally she and Alex would go off into the underbrush in the back yard and play Mrs. Robinson and Benjamin.  This wasn’t something I liked at all.  It encouraged Alex’s marking (in the house!), and generally wasn’t conducive to a harmonious ‘pack.’  I took to keeping the Girls separate from the other dogs most of the time.

And Peekaboo – how to describe Peeks?  I have never met a Sheltie like her before and I hope I never do again.  Peeks had the flattest affect of any dog in my experience, and her range of emotions went from terror to mild anxiety.  I’m serious.  She had virtually no normal dog reactions, she sought no interactions, she was comfortable only with her sister.  I’d say it was heartbreaking but really it was infuriating, because it was so clearly due to truly awful breeding, compounded by the most unenriched environment possible.  I don’t know the hoarder who surrendered Peeks and Posey, but when I learned last year that she had died, I was relieved – for the dogs who would be spared the miserable lives that she provided.  Hoarding is a mental illness, or an aspect of one, of course.  How I hate to see animals pay the price for human problems like that.  At first, friends who had successfully rehabbed Shelties from mills and hoarders, Shelties who had pronounced kennelosis, suggested things to try with Peekaboo to get her out of her emotional corner of fear.  Maybe if Peeks had been younger, some of those things would have had results, but she was 12 when she landed in my house, and the window of opportunity had slammed shut long ago.

In May of this year, Peekaboo was doing poorly and an x-ray showed a tumor on her lung.  Three weeks later, she collapsed and it was clear that she had nothing left, so we made the trip to the vet clinic for the euthanasia visit.  She followed her sister and Charlie into the Great Beyond, and I went home to a changed house:  no more boarders.  It feels different.  Truth:  it feels better.  I’m glad I was able to provide care for Charlie, Posey, and Peeks, but I wish they could have had more – their lives, even in my house, were not lives I would want for any of my dogs.  People did badly by those three, and that saddens me.

Right now, I have five dogs:  Rowley (rescue BC) is 10; Beau (rescue Sheltie) is 11; Alex and Siili (Finnish Lapphunds) are both 6; and Dee (rescue Sheltie mix) is probably 7.  Beau has serious health issues, and has signs consistent with a brain lesion or tumor.  (I don’t want to pay the enormous sum for a complete neuro workup, which would answer questions but change nothing.)  He’s doing well on anti-seizure meds, but the prognosis isn’t good.  I will have a hard time when Beau goes:  from the day he came over and sat in my lap, in the rescue director’s big back yard, I have loved this little guy, and he has been an integral member of my dog family.  I am sorry that he probably won’t get those ‘old dog’ years that so many before him have enjoyed here, and that I hope Charlie and the Girls enjoyed in their own way.

Charlie Bear came in the spring of 2014; the Merle Girls arrived in the summer of 2015.  Looking back, I think I did expect them to become family members, but they never did.  They remained boarders for the time they had here, and it was good time:  Posey died (probably of cancer) in May 2018, Charlie died (of old age) in October 2018, and Peekaboo died (of cancer) in June 2019.  While they were here, they received excellent care in every way, but they simply weren’t members of my family.  I don’t know that they would have been members of any family.  I think with dogs like that, the best solution for their later years is a senior sanctuary.  I wish there were more such organizations.  I donate to the ones I know about, and I hope you will too.  Not every senior dog can be a pet, but every senior dog deserves comfort and ease in its last years.  Here are some places you can help make that happen.

House With A Heart:  https://housewithaheart.com

View all posts by cinnamondog6